Creating an eye catching cinematic effect in your photographs can portray a real sense of drama and creating this effect couldn’t be easier. In this tutorial we’ll show you how to achieve the same effect that we’ve created in our Free Lightroom Preset. But use this as a starting point; experiment and come up with your own cool variations and save them to your own Preset collection (see our tutorial on creating Presets here).

We’ll kick things off in the Develop Module (D) and start with the Basics tab. We’ll use the White Balance section to tweak the colours in the image to get a different tone. For this example I chose to boost the Temp by +12 to warm the sunlight and then take the Tint to -12 to give a slight green tone to the image. Don’t worry, we’ll be desaturating the overall image soon and that will tone the effect done considerably.

Next up, lets move on to the Tone section of the Basics tab. All I tweaked here was the Blacks to darken the overall image slightly.

Finally we have the Presence section and here we’re going to get a little drastic. Firstly, we dropped the Clarity by -30 to soften the overall image. This helps with the out of focus elements and adds a sense of depth. Next up, we take the Vibrance to -85. Vibrance primarily focuses on the warmer colours in the image, so to get the cooler overall tone I wanted to reduce their impact but not remove them completely. Lastly, I wanted to boost the cooler colours and used the Saturation slider to achieve this. For this image we used a value of 41.

So this is where we are at the moment. 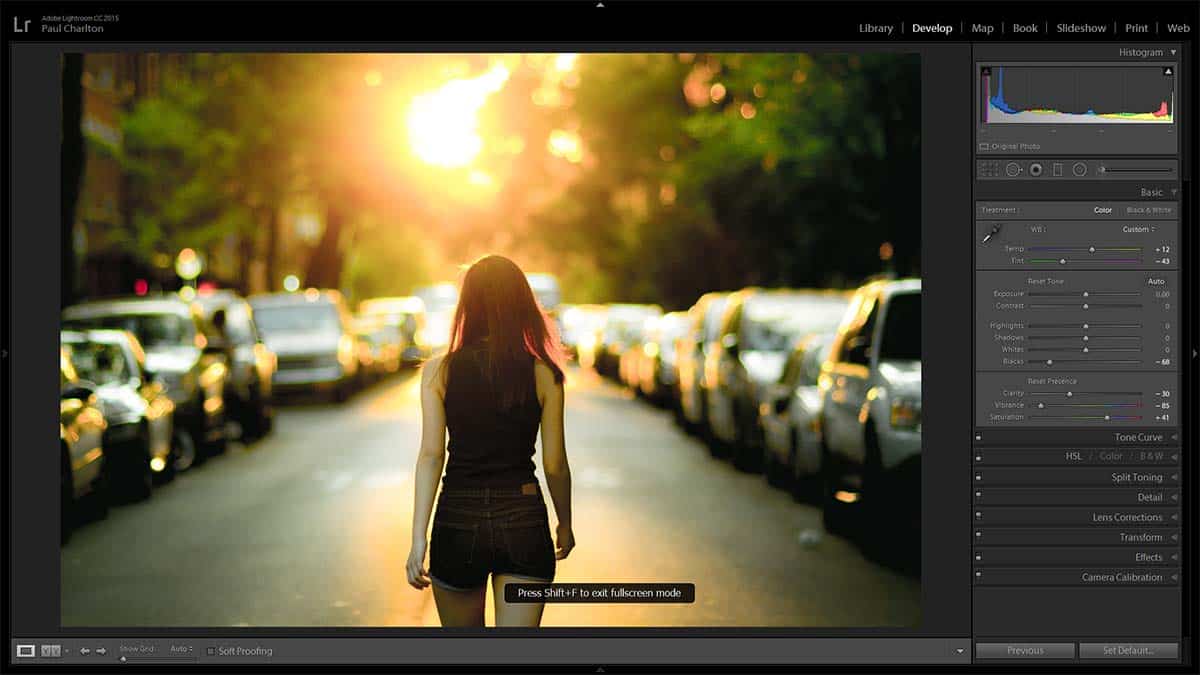 Next we move on to the Tone Curve tab and this is where we can start to really crush the blacks in the image to reduce the amount of contrast being applied. To do this we need to be working in the Point Curve mode. Simply click on the small icon in the bottom right of the panel to switch between modes (see next image).

This will allow you to directly adjust the tone curve in your image.

Simply grab the lower left point and drag this up. This will set the black point for our image to a dark grey and start giving the image that cinematic look.

Now grab the top right point (this will effect the white point in your image) and drag that down a small amount to set the white point for the image. Take a look at our example to see exactly what settings we used.

So now we have a more subdued, less contrasty look to the photograph and we’re well on our way to getting that cinematic feel.

Next up, we’re going to deal with the strong colours in the image and select which ones to reduce. Now this is a stage that will heavily depend on the image, so just use these settings as an example or starting point. If you don’t like them or they don’t work well with your image, feel free to change them or ignore them completely. However, it can really help make the effect look realistic.

This photograph has a lot of warm colours, so to tame those we reduced the Red, Orange, Yellow and Greens pretty drastically. The following image shows the settings we used. Feel free to copy those or use your own judgement. 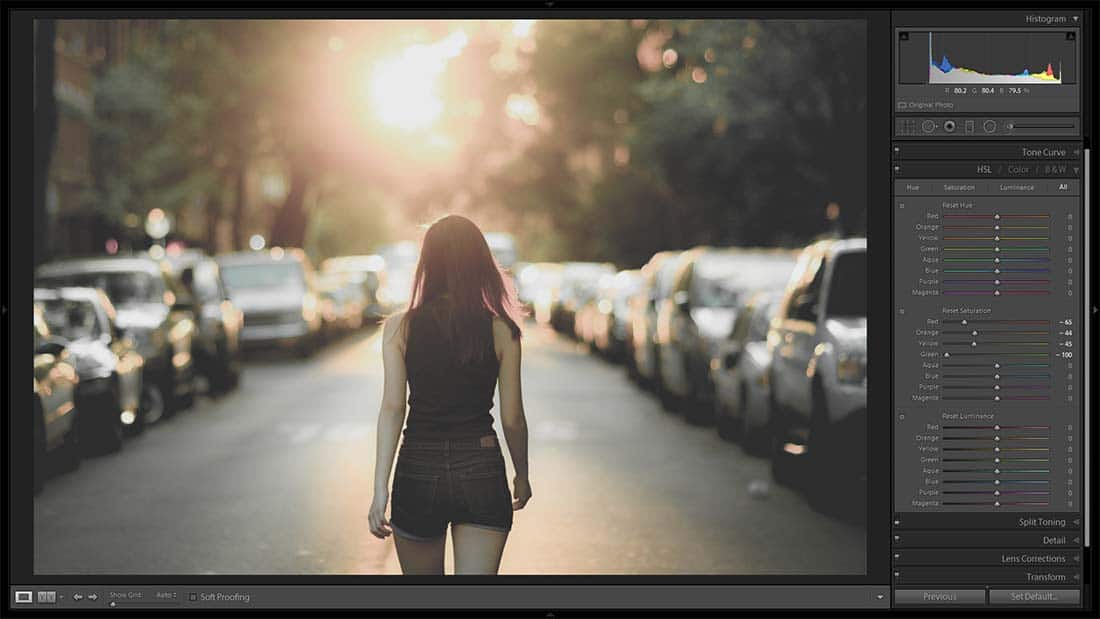 Well we’re nearly finished, only a few more tweaks to do.

Time to add some colour to the highlights and shadows and really add that cinematic look to the shot. Modern cinema uses lots of processing techniques to portray a certain mood and that’s what we’re going to be doing here. We want to add a little warmth to the highlights and some cooler blues to the shadows to finish things up.

So, time to open up the Split Toning tab and get tweaking.

Let’s start with the highlights. We’ll take the Hue to around 65-66 to add in some orange / yellow tints and keep the saturation quite low. A setting of 12 works well, so that’s the starting point. Next up, we have the Shadows, and for these we wanted to add a cool green/blue tint, so opted for a value of 211 and a Saturation of 11. Again, it’s fairly subtle but works well with the overall desaturated image.

One final thing before we wrap things up and this is purely optional. Open up the Effects tab and add in a Post Crop Vignette of -40 and take the Dehaze slider and give that a good boost up to around +70 and we’re done.

How To Create Great Skies in Adobe Lightroom